Host Jill Wagner travels the country on a quest to find talented craftsmen who still make incredible items by hand. Denny Carson of Spokane, Washington, is a woodworker and catch-and-release fisherman who marries his two passions to make stone-studded fishing nets. Heath Van Den Bogaert is a stand up paddleboard maker in Deerfield Beach, Florida who shows Jill that his custom made boards are not just for hitting the water during the daylight hours. In Philadelphia, Pennsylvania, furniture maker Peter Handler creates whimsical tables using local hardwoods and brightly colored aluminum in a process not usually used to make furniture. 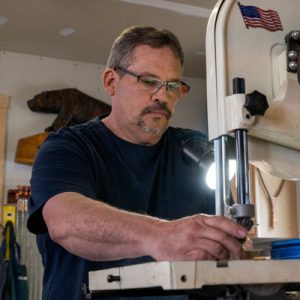 In 2003, Denny’s dad had an idea. He wanted to open a franchise business in Spokane, but not your typical fast food restaurant, cleaning service or fitness center. He was thinking wood. Intrigued, Denny joined his enterprise as the storefront manager of a Woodcraft franchise, and also taught and studied woodworking in the store’s classroom.

When David Marks, host of the show WoodWorks came to teach a class in Bent Lamination, Denny got the inspiration to create landing nets. In that moment, Denny discovered he could combine his love of woodworking and his passion for the great outdoors, in particular, fly fishing. 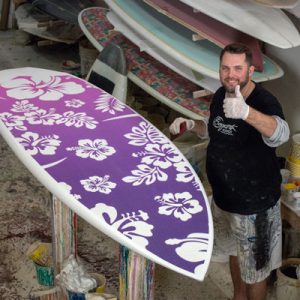 At age 12, Heath Van Den Bogaert caught his first wave—and a glimmer of his future. He was hooked, not only on surfing, but also on learning everything there was to know about how surfboards were able to float, navigate sharp turns, glide atop waves. His youthful curiosity brought him to research materials and surfboard construction. Over the years, his garage became his studio. Having a natural artistic talent, he experimented with design and construction, and later, honed his skills working for manufacturing companies, helping to create and build custom boards for professional surfers and professional-name brand boards. Eventually, Heath decided it was time to branch out, to go out on his own.

From a garage start-up Bogaert Boards is now located in a large factory, but don’t let the “factory” word fool you. Every board is built in house, start-to-finish, one-at-a-time, precision-crafted by hand with American materials. They are lightweight, UV resistant and individually-painted with either the client’s art, custom art or one of Bogaert’s standard designs. 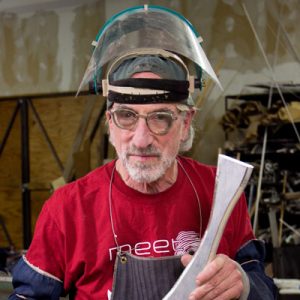 In 1969, Peter Handler emerged from Bates College with a degree in Political Science in hand. That same year, he started experimenting making silver and gold jewelry. A self-taught artisan, his pieces attracted buyers, and over time, he built his sales into a successful career. In 1978, he took a break to attend The School for American Craftsmen at Rochester Institute of Technology, working towards an MFA. There the entire course of his life changed when he discovered aluminum as a material and metal machining as a creative process.

Though his vision had expanded as an artist, upon graduation, he still needed to earn a living, so he went back to creating jewelry, but now, he incorporated aluminum with epoxy resin inlays in his designs. Then came another twist of fate that would yet, again change his path.

At a show in Rochester, in 1981, an interior designer perused his pieces, and asked Peter if he ever worked on a larger scale. The first of many of Peter’s unique aluminum tables came to life.

Peter has shown his work extensively throughout the Mid-Atlantic and New England regions, Chicago, San Francisco, and in the south, from North Carolina to Georgia to Florida. He’s a member of the American Craft Council, and a founding member of the Furniture Society. He was honored to be a featured craftsman in the May 2000 issue of Smithsonian Magazine.