Host Jill Wagner travels the country on a quest to find talented craftsmen who still make incredible items by hand. In Hollywood, Florida, Brenna Baker is turning molten glass into money hungry piggy banks. In Buellton, California, Italian born and raised Salvatore Cisaria is making sure people are getting their morning dose of caffeine with his handcrafted espresso makers that are more like an Italian sculpture than beverage machine. Then, in Sunset, Louisiana, Jill meets Tee Don Landry a man following in his father’s footsteps and making rubboards, one of the only American born musical instruments. 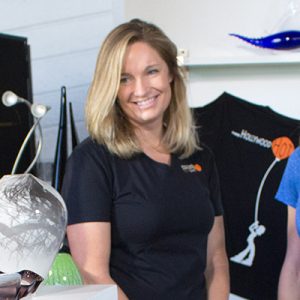 Brenna Baker found her calling at age 14 when she enrolled in a glassblowing class at the Corning Museum of Glass in Corning, NY. At the museum, Brenna learned the basics, the technical and aesthetic aspects of creating stunning pieces of functional art with glass.

Later on in life, she studied with Pino Signoretto, one of the world’s finest glass sculptors, in Murano, Italy. She traveled the world on Celebrity Solstice class ships demonstrating the art of glassblowing with the Hot Glass Show of the Corning Museum of Glass, and taught classes at the museum. She was the youngest Master Gaffer (glassblower), and only the second female gaffer, employed by Steuben Glass. Each opportunity, each experience brought her closer to her dream of becoming an independent glass artist.

In 2013, having moved to Florida, Brenna founded Hollywood Hot Glass, and since then, she creates stunning original pieces in collections, on commission and for installations. Through her workshops, classes and walk-in workshops, she is able to share her knowledge and love for the art of glassblowing every day. 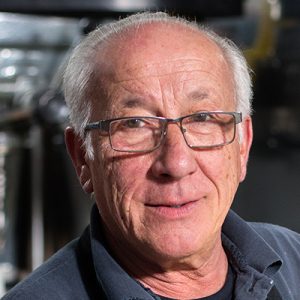 Salvatore Cisaria grew up in the small town of Ostuni in south Italy. His childhood was spent in Caffe Trieste, an espresso shop owned by his uncle, located in the main square. The café is still in the family three generations later, now owned by Salvatore’s cousin. Salvatore’s most vivid memory is going there on a Sunday, at age four or five, and watching two men working the levers of a huge espresso maker. The stunning copper machine captivated the young boy.

Salvatore left school at 13 and went to work learning plumbing, metal and electrical work. At 18 he entered the army, and later landed a job in a high-tech machine shop in Florence, making buckles and accessories for purses and shoes.

When he moved to California in 1984, he took a job selling and repairing espresso machines. One of his tasks was to install machines in customers’ homes, one of whom was Nikki Sixx, bass player in the metal band, Motley Crüe. In his time at the company, Salvatore discovered there were very few espresso machines for home use, and what was out there were poorly made. If one wanted a decent machine it had to be imported from Italy, but even then, they were not stylish.

In 1993, three years after meeting Wendy, the woman who would become his wife, Salvatore started making his own espresso machines. Today, the 63-year-old artisan who was once mesmerized by a large espresso machine in a small town in Italy, ships espresso makers all across the country and the world to thousands of customers. His business is largely online with Wendy overseeing the sales and technical support, but he maintains a showroom where his most creative machines are on display, with his workshop directly behind.

His machines are unique, handmade, signed by him, dated, assigned a serial number, and personalized with the customer’s name. 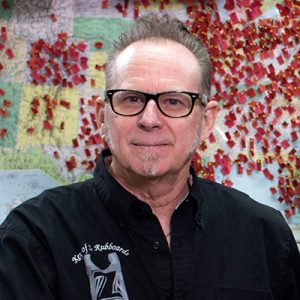 Listen to any Zydeco band and you’ll hear that distinctive percussive sound of the “frottoir,” the rubboard. Tee Don Landry’s roots go straight to the very beginning of this unique instrument, one of few created in America, because it was invented by his father, metalsmith, Willie Landry in 1946 for the then unknown Creole musicians Clifton and Cleveland Chenier. Clifton went on to be known as the “King of Zydeco.”

Today, Tee Don, a Zydeco and Cajun musician in his own right, carries on that historic family tradition. All of Key of Z rubboards are made of stainless steel by hand, and are numbered and registered.

They’re in demand worldwide, and played by some of Zydeco’s best known stars, and by musicians in other musical genres, as well, including Buckwheat Zydeco, C.J. Chenier (son of Clifton Chenier), ZZ Top, Kid Rock, The Fabulous Thunderbirds, Rihanna, and many others.