Host Jill Wagner travels the country on a quest to find talented craftsmen who still make incredible items by hand. In Charleston, South Carolina, metalsmith Sean Ahern shows Jill how he hammers out his intricately designed and elegant steel fire screens that look like natural bamboo. Then, in Omaha, Nebraska, woodworker and toymaker Steve Baldwin lets out his inner child when he makes his beautiful wooden puzzle toy cars. Finally, Jill goes to West Point, Mississippi where she meets basket weaver Bessie Johnson who uses only what she can find in her yard to craft intricate pine needle baskets. 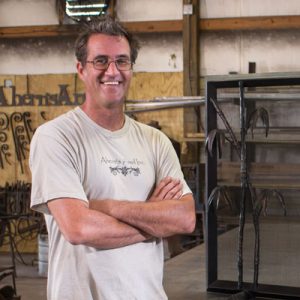 Born and raised in Charleston, South Carolina, Sean Ahern was surrounded by plenty of inspiration to fuel his creative talents. As a young boy, he was fascinated by found objects and spent much of his time drawing what caught his eye.

As a student at the Atlanta College of Art, his interest shifted from the two-dimensional to the three. He started working in bronze and iron, incorporating natural shapes and organic movement into his work. After graduation, he apprenticed with local artists then headed to France to study at L’École des Beaux-Arts in Saint Etienne.

In 2001, missing the ocean and the Lowcountry, he returned to Charleston. The following year, he opened Ahern’s Anvil and began producing functional objects and ornamental ironwork. From unique to traditional, his original designs connect architecture to the environment. He draws his inspiration from the Lowcountry landscape: the marsh grass, Spanish moss and the stunning ironwork that is integral to many of the surrounding homes and architecture. 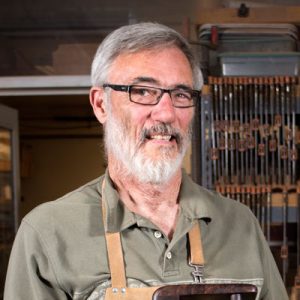 With 30 years sharing his skills with high school students behind him, retired industrial arts teacher Steve Baldwin did not take to life in a porch swing, watching time pass. Instead, he created a whole new career for himself borne of the same passion he imparted daily in those hallowed halls—creating fine, completely handcrafted wood toy cars. He’d been making wooden toys since the late 60s, but in 1976, he started Baldwin Toys. His workshop was a corner of his basement, and he intended to make just six cars, thinking he would sell one a month at art shows. That plan went out the window at the very first show, when all six cars sold.

Steve’s cars start from rough lumber—walnut, cherry, maple, rosewood and padauk. Each car is as unique as the grain patterns of the various woods. Steve spends hours on each step of the process, from initial design, to precise fitting and shaping, to hand sanding and finishing with rich oils and wax. Most designs are built on the puzzle concept, where the car can be dismantled and reassembled.

“If you are giving the item as a gift; wrap each of the pieces individually and watch as the recipient tries to guess what it is as they unwrap each new piece,” Steve says on his website.

Steve enjoys getting out to art shows and chatting with people. He’s displayed at more than 500 shows across the country, and has won countless ribbons and awards, and every year his toys are featured at the Mannheim Steamroller Christmas concerts. 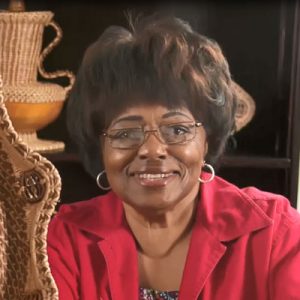 Mississippi native, Bessie Johnson has been fascinated by basket weaving since she was a child, as she sat watching her father weave chair seats and baskets. She felt a kinship with the earth and its inhabitants in those sublime moments. Basket weaving was in her blood…and in her soul.

Over the past 40 years Bessie has developed a style that is all her own, born of a rich cultural heritage and a contemporary artistic vision. She uses long leaf pine needles that grow along the southern border of the Gulf states and other natural materials, such as gourds and corn shucks to create her ornate and unique baskets. In addition to practicing her craft, Bessie shares it, giving back to her community, teaching children and elderly adults.

Bessie is a charter member of the Craftsmen’s Guild of Mississippi and has won numerous awards at major art shows and festivals, including the Governor’s Award for Arts Excellence in 2010. In 1994, she was chosen to design and create ornaments for the Mississippi Christmas tree that was displayed in a circle of state trees at the White House.

On her website, Bessie says, “Every time I create a basket, I give new life to a craft that is age-old…Weaving baskets with native Mississippi materials takes me back to some of my dearest childhood memories. I consider this to be an artistic link to my African forefathers. It is as much of my family’s legacy as any genetic inheritance.”