Outlaw cousins Jedediah “Kid” Curry and Hannibal Heyes give up robbing trains and banks, and assume new identities in Wyoming Territory, hoping for a grant of amnesty from the Governor. But there’s one sticky condition: They have to prove they’ve reformed, and meanwhile, they’re still wanted men.

Kid Curry and Hannibal Heyes…”one of the worst bands of desperadoes the Territory has ever had to deal with.”

Cousins Jedediah “Kid” Curry and Hannibal Heyes spend a lot of time together—breaking the law! Known for his smooth-talking style and quick wits, Hannibal is the brains of the Devil’s Hole Gang, and Kid is the tough guy, quick on the draw, though neither man has ever killed anyone. Hannibal and Kid specialize in bank and train robberies, and their success rate has earned them the reputation as two of the most wanted outlaws in the history of the West.

But Wyoming Territory is changing, modernizing to some degree. Bank safes are tougher to crack. Speedier trains are more difficult to bring to a screeching halt. Posses, sheriffs and detectives are more determined to hunt the cousins down and shrewder in their methods. And, now in their late twenties, Hannibal and Kid start having thoughts of retiring from the outlaw life, and when Hannibal has a falling out with the other members of the gang, decision time is at hand. They cut loose intending to go straight. But when your names and physical descriptions are on wanted posters all over the Territory, it’s hard to simply set aside your past, repent, reform, and assume a normal life. 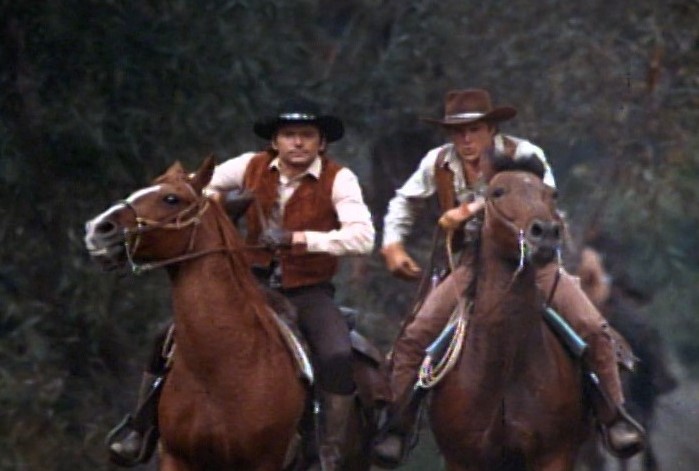 Sheriff Lom Trevers, an old acquaintance of the boys, tells them about an amnesty program offered by the Territorial Governor. Since their capers never resulted in capture and conviction, their alleged crimes are not eligible for a pardon. Amnesty is their best bet, especially since one of the stipulations is that eligible outlaws must not have killed anyone.

The Governor, a slick politician and very aware of his image and what voters think of him, is adequately impressed by Hannibal and Kid’s “resume” of crimes. Granting them amnesty could either benefit or destroy his career, so he comes up with a plan to test the waters before going all in. He grants the cousins conditional amnesty. They must stay out of trouble, commit not one crime, no matter how small, until the Governor determines they have fully reformed and deserve complete amnesty. However, the amnesty deal must remain a secret, and until the Governor makes an official announcement, the boys are still wanted men—subject to arrest and conviction, if they’re found out!

They see no other option, so Hannibal takes the alias of Joshua Smith, and Kid becomes Thaddeus Jones, both honorable, law-abiding drifters. Naturally, adapting to this new life on the straight and narrow is no easy task for the cousins, as old outlaw friends show up, and bounty hunters, the Bannerman Detective Agency and other lawmen, hoping to cash in on that reward money, are hot on their trail.

Can they reform their outlaw ways, earn an honest living, help and gain the trust of their fellow citizens, prove to the Governor they’re worthy of amnesty before the law catches on to their true identities? Every episode is a new adventure, a new challenge and another step towards amnesty.