“With season 3 we will achieve our original goal of featuring all 50 states,” said Butts.  “Beginning with the very first episodes in 2016, reaction from people across the country has been very positive.  Viewers took great pride in seeing their state featured, and they enjoyed going on this journey with charismatic host Taylor Hicks, who made learning about the history of regional and local foods interesting and fun.” 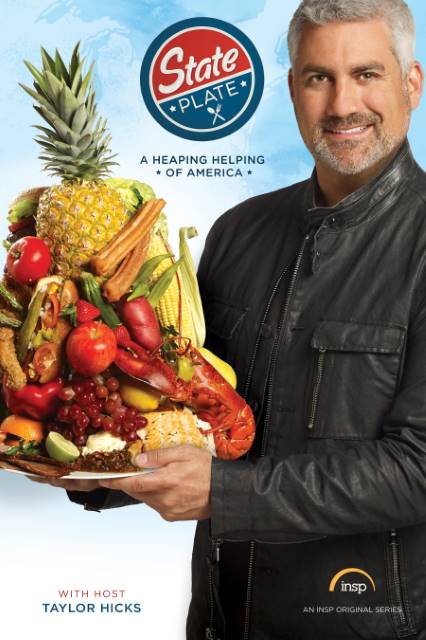 In this season of State Plate, Taylor Hicks continues his quest to assemble the perfect state plate – representing their most historic, famous and tastiest dishes. For two years, he has crisscrossed America visiting farms, ranches, markets, and festivals to uncover the stories and legends behind each state’s unique food traditions. This season, he will sample a kalua pig in Hawaii, an ice cream potato in Idaho, an elk filet in Wyoming, and all manner of other items, as he tastes his way through the final 14 states of his epic journey. It’s a heaping helping of America’s most beloved cuisine, rich in history, folklore, and flavor.

The premiere date for the third season of State Plate, which will include 14 episodes, will be announced soon.

What the critics have said about Taylor Hicks and State Plate

“Not only does Taylor Hicks know how to carry a tune, he’s also pretty good with a fork. The platinum-selling musician and former American Idol winner has been traveling the country to spotlight some of his favorite dishes for State Plate, a food-travel show on the INSP television network.” -USA Today

“Tasked with uncovering the stories behind the country’s most popular dishes, Hicks travels far and wide to farms, festivals and into the kitchens of some of the nation’s best cooks to learn about their homemade recipes.”  –Parade.com

“Imagine a plate full of the best food a state hast to offer.  That’s exactly what Taylor Hicks is serving up on State Plate on the INSP network.”

“If you haven’t seen “State Plate,” you are missing a fun and educational treat with the lovable host Taylor Hicks, former “American Idol” winner and platinum-selling entertainer.”

RIVR Media is an American-based TV production company, specializing in reality, documentary and digital programming. RIVR has produced over 2000 shows for 21 cable networks including such series as Renovation Realities, Escaping Polygamy, Trading Spaces, Whale Wars, and Fat Guys in the Woods, to name a few.

Taylor Hicks is one of the most beloved and popular American Idol winners of all time. From the start, Hicks’ material on the mega-hit show set him apart, with a unique take on Country, Southern Soul, R&B and Blues. Sixty-four million votes were cast and nearly 37 million American viewers and more than 200 million viewers worldwide tuned in to crown Hicks the Season 5 winner of American Idol, making it one of the most-watched TV events of the last decade. Hicks’ star continued to rise after he stepped off the Idol stage. Less than three weeks after his Idol victory, his debut single, “Do I Make You Proud,” entered at No. 1 on Billboard’s Hot 100, Pop 100, and Single Sales Charts. His self-titled album (Arista), debuted at No. 2 on the Billboard 200 and was quickly certified RIAA Platinum. Hicks is the first male Idol winner to be featured on a Grammy Award-winning album, Jimmy Fallon’s “Blow Your Pants Off,” which took home the 2013 Grammy for Best Comedy Album. Hicks’ career has included stints on Broadway, a national tour with a hit musical, as well as headlining Paris, Las Vegas and other Caesars Entertainment properties all over the United States.  Taylor is currently on a nationwide tour, and is also working on a new album.