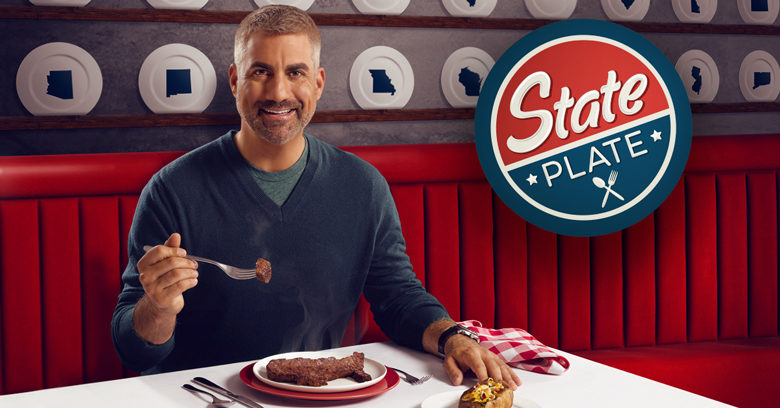 “Not only does Taylor Hicks know how to carry a tune, he’s also pretty good with a fork. The platinum-selling musician and former American Idol winner has been traveling the country to spotlight some of his favorite dishes for State Plate, a food-travel show on the INSP television network.” – USA Today

“Tasked with uncovering the stories behind the country’s most popular dishes, Hicks travels far and wide to farms, festivals and into the kitchens of some of the nation’s best cooks to learn about their homemade recipes.”  – Parade.com

(Indian Land, SC – July 25, 2018) General entertainment television network INSP has set the premiere date for the third season of its popular original culinary-travel series State Plate. The new season will bow on Monday, September 24th in a new timeslot: 12:00PM ET. Hosted by former American Idol winner, musician, and restauranteur Taylor Hicks, State Plate takes viewers on a tour of the most iconic foods across the country. The announcement was made by Doug Butts, SVP of Programming for INSP.

“For three years Taylor has been on a mission to highlight the most iconic foods in all 50 states, and at the conclusion of season 3, he will have done exactly that,” said Butts. “From the preparation of Cioppino fish stew on the California coast to the anticipation of a big lobster catch in Maine, Taylor has taken our viewers on a culinary journey of more than 250 foods.  It has been both entertaining and informative.”

“In addition,” continued Butts, “while everyone revels in seeing their home state featured, it has been very gratifying to see how much viewers have also enjoyed discovering new dishes in other locales across the country. Moving the series to noon should expand the show’s reach even more as midday prime is a popular daypart for our network.”

In this season of State Plate, Taylor Hicks’ adventures include sampling kalua pig, an ice cream potato and an elk filet, as he tastes his way through the following 14 states of his epic journey: Hawaii, South Carolina, West Virginia, Virginia, Delaware, Tennessee, Arkansas, Oklahoma, Kansas, Michigan, Indiana, Idaho, Utah and Wyoming. It is a heaping helping of America’s most beloved cuisine – rich in history, folklore and flavor.

RIVR Media is an American-based TV production company, specializing in reality, documentary and digital programming. RIVR has produced over 2000 shows for 21 cable networks including such series as Renovation Realities, Escaping Polygamy, Trading Spaces, Whale Wars, and Fat Guys in the Woods, to name a few.

For Taylor Hicks, winning “American Idol’s” blockbuster fifth season was just the beginning. Hailed as “part Stax, part Motown and part honky-tonk” by The New York Times, Hicks’ intoxicating blend of soul, blues, country, and rock & roll quickly rendered him a household name as he progressed to the show’s record-breaking finale in 2006, an historic television event which drew an audience of more than 200 million viewers. Hicks immediately followed his Idol victory with a #1 Billboard single and an RIAA certified Platinum debut, and soon went on to make history as both the first male Idol champion featured on a GRAMMY-winning record (Jimmy Fallon’s ‘Blow Your Pants Off’), and the first to land a prestigious Las Vegas residency. A versatile artist, actor, and advocate, Hicks has since ventured into theater and television, touring as Teen Angel in the popular Broadway musical “Grease” in addition to appearing on “Law & Order: SVU” and hosting “State Plate,” his own food and travel show now entering its third season on the INSP television network. Hicks’ passion for southern cuisine also led him back to his native Alabama, where he opened up Saw’s BBQ & Juke Joint, a restaurant recently crowned one of the “25 Best Barbecue Spots in America” by Men’s Journal. After a lengthy hiatus from recording, Hicks returned in 2017 with “Six Strings and Diamond Rings,” the first single since his beloved 2009 sophomore album, “The Distance.” The stirring, stripped-down track offers up a tantalizing preview of Hicks’ highly anticipated third album, a deeply personal, roots-inspired collection recorded at Zac Brown’s Southern Ground studio in Nashville with contributions from Robert Randolph, Keb Mo, and Widespread Panic’s JoJo Hermann. Produced by Hicks along with GRAMMY-winning guitarist Bryan Sutton (Garth Brooks, Brad Paisley), the album is due out later this year and will bring Hicks back on the road for extensive touring.