Southern farmer, Charlie Anderson is adamant about keeping his six sons out of the Civil War. When his youngest is taken prisoner, the War suddenly hits home.

Widower and farmer, Charlie Anderson enjoys his life on his 500-acre Shenandoah Valley farm in Virginia. Since the death of his wife, while giving birth to Boy, his youngest son, now sixteen, Charlie has mourned his wife’s loss, but steadfastly with discipline and compassion, brought up all six of his boys and one daughter to be hardworking, righteous individuals. Now, he shares his farm with his children and a daughter-in-law, and often visits his wife’s grave to talk to her. 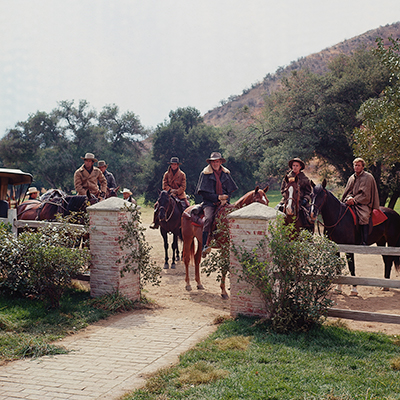 With the war escalating and growing more brutal, danger threatens their lives, but Charlie pays it no mind. As far as he’s concerned the war between the north and south is none of his family’s business. He doesn’t keep slaves and he refuses to fight for the right of others to do so. Nor is he compelled to support the Union cause against slavery. Basically, a pacifist, his only interests are his home, his land and family. Though a few of his sons want to join up and fight, they respect their father’s wishes to remain on the farm. Meanwhile, his daughter, Jennie falls in love with Sam, a young Confederate soldier, played by Doug McClure. Fans of “The Virginian” will recognize him as Trampas! Though hesitant, Charlie gives permission for them to marry, and soon after they speak their vows, Sam is called to battle.

As the Civil War rages ever closer, with soldiers marching onto his property attempting to recruit his sons, and bargain for livestock, he is more determined than ever to keep himself and his family out of it. Though, restless, his sons continue to comply. But a war that’s happening all around you is hard to ignore. Then in one swift moment, fate brings the savagery of war, with all its heartbreak and tragedy, right to Charlie’s doorstep.

One day, while out hunting, Boy and his friend narrowly escape an ambush. They stop for a drink at a pond, and Boy, wearing a cap from a Confederate uniform he’d found earlier, is mistaken for a Rebel soldier and taken prisoner by a Union patrol.

His values and faith put to the test, Charlie gathers his strength to track down his son and bring him home.