Stuck for the summer on the farm of his two eccentric great-uncles, 14-year-old Walter uncovers a family mystery and learns a lesson about truth.

Walter Caldwell is used to his mother Mae’s lies and flighty behavior. Now she’s outdone herself. She dumps him for the summer on the Texas farm of her two eccentric, bachelor great-uncles, Hub and Garth McCann. The brothers give Walter a room in the attic where the boy finds a picture of Hub’s lost love, Jasmine. The elderly gents are none too pleased at having Walter around, especially Hub, and when a family of relatives arrives at the farm searching for the fortune Hub and Garth are rumored to have hidden there, the brothers are convinced Walter has the same ulterior motive. They threaten the boy with foster care and he runs away. By chance, the uncles spot him at a gas station phone booth trying to get in touch with his mother. Once again, Walter catches his mother in a lie, and Hub and Garth persuade him to return to the farm, though Hub is still suspicious. 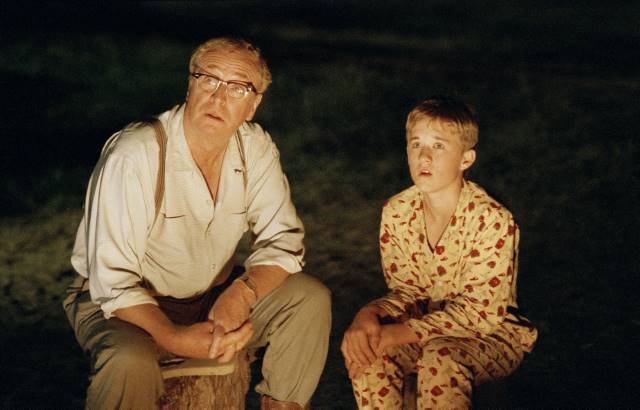 In time, Walter settles into life with his quirky great-uncles. Known for their tall tales and hijinks, Hub and Garth attempt daredevil stunts, shoot at salesmen for amusement, and even buy a lion. They tell Walter adventure stories of their pasts, and the boy learns the tragic truth about Hub’s great love, Jasmine, and he grows to respect the elderly duo he was foisted upon. Most importantly, he learns about love, honor and what it means to be a man, lessons he would not likely receive from a mother who thinks only of herself and her latest boyfriend.

Just as Walter and the uncles are bonding as family, Mae shows up with her current love, Stan. She demands Walter tell her where Hub and Garth have hidden their fortune, saying they robbed it from a bank, therefore it’s up for grabs.

Now, Walter has a choice. Believe his mother who has deceived him time and again, or his two dotty, old great-uncles, whose tales are so outrageous they may not be true at all.

Roses are red, violets are blue,  INSP Valentines just for YOU!   Amanda Blake SAVE THIS VALENTINE   Maureen O’Hara... READ MORE

John Ford Behind the Lens: 3 Godfathers

3 Godfathers (1948) While fleeing from a posse in the desert, three outlaws, Robert Marmaduke Hightower, Pete “Pedro” Fuerte and... READ MORE