Audie Murphy stars in this pulse-pounding Western! Clay O’Mara wants justice following the deaths of his father and brother. Along the way, he arrests – and then teams up – with a notorious gunslinger to find the real killers. The pair should be unstoppable…if they survive!

In this action-packed Western adventure, Murphy plays a railroad surveyor who’s a lightning-fast draw – and out for revenge.

Upon receiving word that cattle rustlers killed his father and teenage brother, Clay O’Mara leaves Denver and comes back home, seeking revenge. He turns to Sheriff Fred Kenyon and his family lawyer, Tom Meredith, for answers. 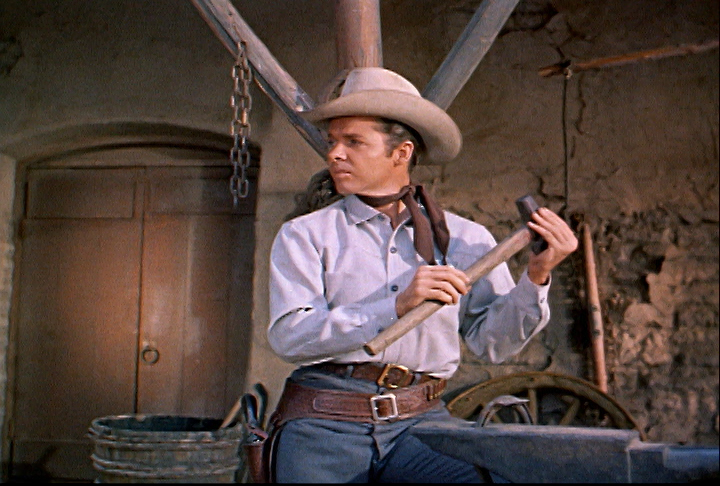 What he doesn’t know is that Fred and Tom are the very men who rustled the O’Mara’s herd!

Tom and Fred decide to hang the blame for the murders on notorious gunman Whitey Kinkaid – and tell Clay that he should ride to Diablo to arrest him. They give Clay a deputy’s badge and send him off. Fred and Tom realize that Kinkaid has nothing to do with the O’Mara murders and cattle rustling – but they hatch a plan to hire the gunslinger to kill Clay!

If, and when, Clay finally tracks Whitey down, nobody expects him to outshoot Whitey or, for that matter, to outlive him. But Clay amazes everyone when he, not only tracks Kinkaid down; but he also outdraws him, arrests him, and even fights off an ambush by three men!

For his part, Kinkaid finds Clay’s unstoppable nature and earnest quest for vengeance amusing. So, instead of killing him, he befriends him…and vows to help him track down the real killers.

Now a team, these two gunslingers will be a force to be reckoned with – if they survive!