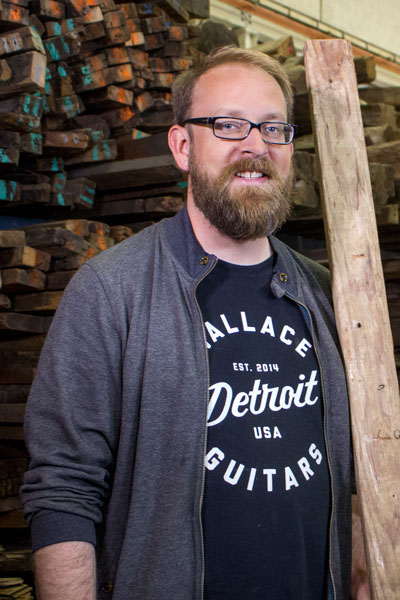 Detroit. The Motor City, known for cars and music! When Mark Wallace, CEO of the Detroit RiverFront Conservancy did a tour of a reclaimed wood warehouse in Detroit, he noticed wood reworked for a café countertop, and examining it, he realized it was about the same thickness of his electric guitar. That momentary thought sparked the idea that would later become to Wallace Detroit Guitars.

A longtime musician who plays guitar, drums, violin and fiddle, it wasn’t a huge leap to think he could build his own guitars from reclaimed wood, but his expectations for success were low. He figured he would make two guitars, and perhaps one would fall apart, and the other would work. He didn’t think beyond that, but in 2013, after seeing his prototypes, friends encouraged him to take his idea further. He applied for an $8,000 Knights Arts Challenge Grant—and won. Wallace Detroit Guitars was born.

Detroit has roughly 70,000 abandoned homes, homes that will never be inhabited again. Rather than demolish them, sending the debris to a landfill, the city deconstructs the buildings, so the salvageable portions can be reused. That is a goldmine to artisans like Mark, who look on the scarred, painted wood not as trash, but as treasure.

What drew you to your chosen craft?

I love guitars. And I love making things. When I moved to Detroit, I bought an old house and started doing basic carpentry. Over the years, I kept broadening my interests and my toolbox.

It’s satisfying to see wood from an old house turned into a beautiful instrument. Lots of people gave up on Detroit. But the city is still full of amazing families and interesting people.

Working with your hands gives you a sense of accomplishment and connection to the product that you don’t get any other way.

Handmade goods are made with love. And when you’re working with wood, it’s important to respond to what the wood is telling you. Especially when the wood is over a hundred years old and could have nails in it!

What does the future hold for your type of work?

I expect that more and more people will gravitate towards handmade instruments. The mass-produced guitars aren’t fun to play because the craft has been squeezed out of them for the sake of profit.