You don’t need to be an astrologer to be struck by the fact that two of the greatest icons of the Western were both born on May 26th. Wayne was born in 1907, Arness in 1923, and after their first meeting in 1951, their lives would be linked as long as either man lived. 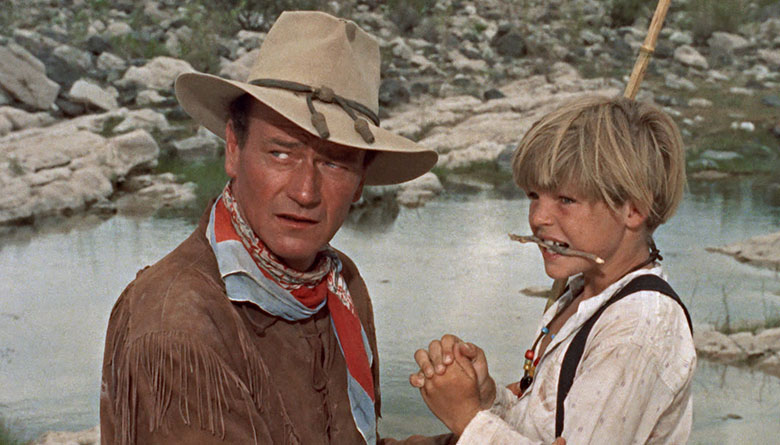 Losing his USC football scholarship after busting a shoulder, John Wayne entered the movie business as a propman, began acting in 1926, and with his breakthrough role in 1939’s Stagecoach, he’d been a certifiable box-office star for a dozen years. He even had his own production company, Fellows-Wayne. Arness, also an athlete in his youth—and an obsessive surfer all of his adult life—had enlisted in the Army. At Anzio he walked into a German machine-gun nest and got his lower right leg shot to pieces. Recovering stateside, with no future plans, as Arness tells in his autobiography, his younger brother, later famous as actor Peter Graves, told him, “At the University of Minnesota I took radio drama and announcing. It was great—I think you might really enjoy it too.” Peter could not have been more correct, Arness recalled, “Right from the start, I knew that this was for me.”

In 1951, Arness was getting small parts in films, and doing theatre. He was doing a Greek drama when a man came backstage and asked to meet with him at the prestigious Charles Feldman Agency the next day; they had a movie role in mind for him. That meeting went so well that the next meeting was to be with the film’s star and producer: John Wayne. The meeting at Republic Pictures went very well indeed. After Jim answered questions about his background, Wayne asked, “Well now, let’s get down to the important part. Do you drink?”

Arness wrote, “I thought well, this is my kind of guy, a totally relaxed, real person. I told him I’d been known to take one or two here and there.” This was in the ‘Red Scare’ days, and in the movie, Big Jim McLain, Wayne, and Arness played investigators for the House Un-American Activities Committee, hunting a communist cell in Hawaii—meaning Arness could finally surf in Hawaii! 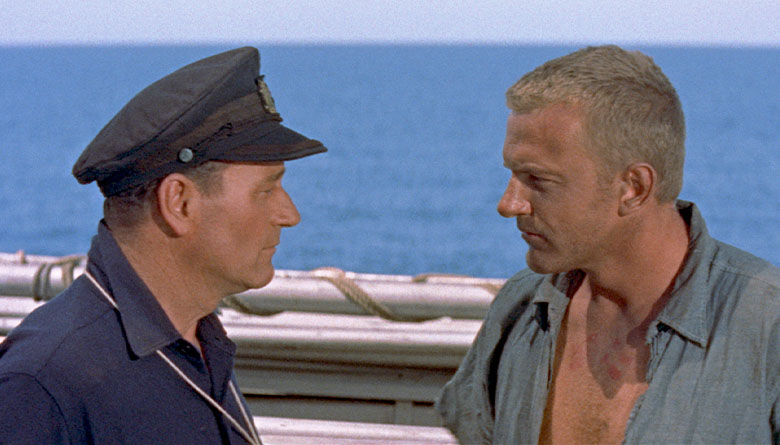 Wayne put Arness under contract and kept him busy. In addition to McLain, Arness would have sizable roles in three more films opposite Wayne: Hondo, and Island in the Sky, both in 1953, and The Sea Chase in 1955. Wayne also loaned Arness out for many films, including Westerns like Hellgate, Horizons West, The Lone Hand, and Many Rivers to Cross.

William Paley, the head of CBS, was preparing to transfer their hit radio series, Gunsmoke, to TV, and he was determined to have John Wayne star as Matt Dillon. He made Wayne an unprecedented offer: $2,000,000, plus partial ownership of the series. Wayne’s son, Patrick, remembers, “And my dad says, ‘No, I don’t want to do television. I’m a movie guy. But I have a guy under the contract, name’s James Arness.” And he pitched CBS until they consented to see him. “So, my dad goes back to Arness and says, ‘I’ve got a deal for you, son. You’re gonna star in Gunsmoke on TV.’ And Arness says, ‘No, I don’t want to do television. I want to do movies.’”

Arness’s doubts were understandable. As he wrote, “Television was not the big business it is today, and once you became known as a TV actor it could be difficult to get back into the movies.”

Pat remembers his father telling Arness, “You are too [physically] big to have a career in films.” Wayne pointed out that while Arness was getting work, the only lead he’d gotten was in The Thing, as the monster. “He did the whole sales pitch on Arness, brought the two units together. And of course, the rest is history.”

The nearest thing to a falling-out between the men came about five years later when John Wayne was preparing to direct The Alamo, a project he’d been planning for fourteen years. He wanted Arness to play General Sam Houston. Wayne contacted their mutual friend, Andrew V. McLaglen, who was directing Arness in Gunsmoke, to set up a meeting. McLaglen told Courtney Joyner, for his book, The Westerners, “So I set it up with Jim. And at the end of shooting on this given day, Wayne came over with about five of his production gang to talk to Arness. And guess what? Arness ran out on the appointment.” He would never say why, and Wayne was furious. McLaglen also directed Have Gun, Will Travel, and Wayne asked to meet Richard Boone. “Boone was jumping all over with excitement.” He played Houston wonderfully, and later appeared with Wayne in Big Jake and The Shootist. Patrick Wayne, who worked with Boone in both The Alamo and Big Jake recalls, “He could work better inebriated than 90% of the people sober. And thank God because he was always inebriated.”

Did Wayne and Arness heal the rift? Patrick Wayne says, “Sure. You know, in this business you make friends on films, you’re with people for a period of time, you have these close, intimate relationships, intense relationships. You may not see the other person for three years. Then you sit down with them like you’ve just seen him the day before and have quality time. That’s how I would describe the relationship he had with Arness.” 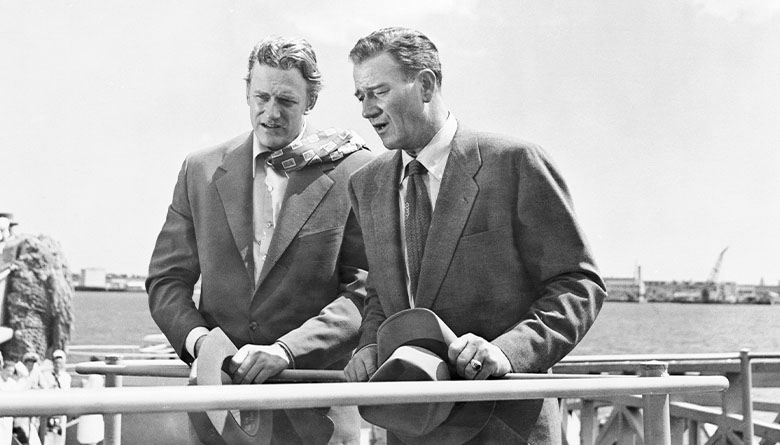 After a long and heroic battle with cancer, John Wayne died in 1979. In 1988, the classic John Wayne Western Red River was being remade for television. Gregory Harrison was producing and playing the John Ireland role of Cherry Valance. Bruce Boxleitner was playing Matt Garth, Montgomery Clift’s part in the original. But who would play John Wayne’s role of Thomas Dunson? There was talk of Robert Mitchum, of Kirk Douglas, but they wanted James Arness; but he was unreachable. Boxleitner and Arness had co-starred in the series How the West Was Won, but that had ended nearly a decade before.

Boxleitner recalls, “He was a very reclusive man, very private man. And I called him, and I said, CBS wants to do this very badly. And James didn’t want to do a role that was identified with John Wayne, because of his respect for his friend and mentor. And I said, there’s only one man left anymore that could even go near John Wayne, and James, you’re the guy. You know that. And he said, ‘Well, damn them, send me the script.’” He did the role and did it well.

Buck Taylor, who played Newly to James Arness’s Matt Dillon in about 150 Gunsmoke episodes, tells in Arness’s autobiography about watching an awards program. “Jim introduced Wayne for the award. Jim said, ‘So now I’d like to introduce you to my friend, John Wayne.’ Well, the Duke walks on stage, tuxedo and all, looked at Jim, and said, ‘You’re bigger than I am.’ There was a split-second pause and then Jim responded, ‘Taller, maybe.’ That was Jim. That’s one of the greatest lines I ever heard.”