In 1939, James Stewart, an actor who would become a war hero, played a pacifist lawman in a Western comedy called Destry Rides Again. In 1954, Audie Murphy, a war hero who had become an actor, would play that same pacifist lawman in Destry. Both films are terrific fun and important highlights of each actor’s career. 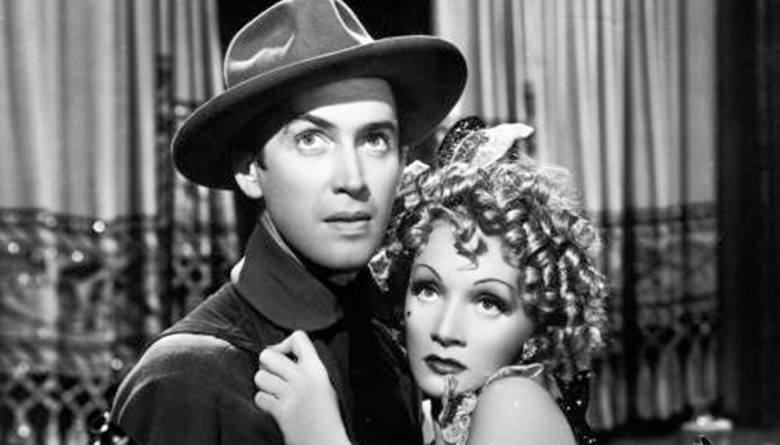 Stewart, who would reach the rank of Colonel in the Army Air Corps during World War II, had been a busy actor since 1935. He’d already been in 22 movies, but he had never before done a Western, the genre that would become his favorite. Murphy, who at 19 became the most decorated American soldier of the war, would star in nearly fifty movies, most of them Westerns. Destry was one of the very few to show that he could not only play a tough guy but had the range to handle comedy.

The story came from novelist Max Brand, who would become wealthy selling M.G.M. the film rights to his Dr. Kildare novels. First published in 1930 as a serial in Western Story Magazine, Destry Rides Again bears scant resemblance to the movie versions, which is why the credit Brand receives is “suggested by the novel.” In the novel, Harrison Destry is a braggart and a bully who is framed for a robbery and sent to prison. When he is freed six years later, he vows to track down and punish the twelve crooked jurors and becomes a better man in the process. 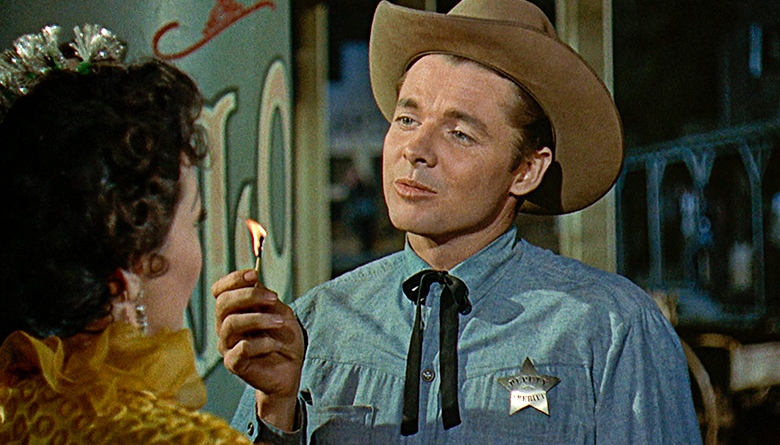 In the films, when an honest sheriff is murdered trying to save a farmer from being swindled, the crook in charge appoints a former deputy, now a drunkard, as the new sheriff. But the new sheriff sobers up and calls in the son of his old boss, Destry, a legendary lawman, to clean up the town. Destry the younger carries no gun and appears to be a coward, but appearances prove very deceiving—if you think you hear echoes of Zorro, you are not wrong.

Universal gave Destry to producer Joe Pasternak, who had saved the studio from bankruptcy with his Deanna Durbin musicals. The director was George Marshall, a master of comedies, Westerns, crime films, and musicals, who’d begun directing in 1916. Marshall would do such a delightful job on Destry Rides Again that, when Universal decided to remake it with Audie Murphy, they hired him to direct that version as well. (The year before, Paramount hired him to direct Dean Martin and Jerry Lewis in the hilariously spooky Scared Stiff, a remake of the wonderful Bob Hope comedy The Ghost Breakers, which Marshall had directed in 1940.)

So, how do the two Destrys compare? The female lead, the saloon entertainer who works with the gangster until she falls for Destry, was Marlene Dietrich in the first film, and Mari Blanchard in the remake. Dietrich, a wonderful personality and actress, was a big star—she’s billed above Stewart. But her career had been in freefall after several flops. She desperately needed a hit, and she threw all of her talent, charm, and humor into the role. As Frenchy, she has several musical numbers, including the unforgettable See What the Boys in the Back Room Will Have. Blanchard, to fight the effects of crippling childhood polio, had become an athlete, excelling in dance and swimming. Perhaps because Dietrich was so identified with her songs, Blanchard, whose character is Brandy, had different songs, which were merely adequate. While Blanchard is more traditionally beautiful and had a better voice, Dietrich’s performance is unbeatable. 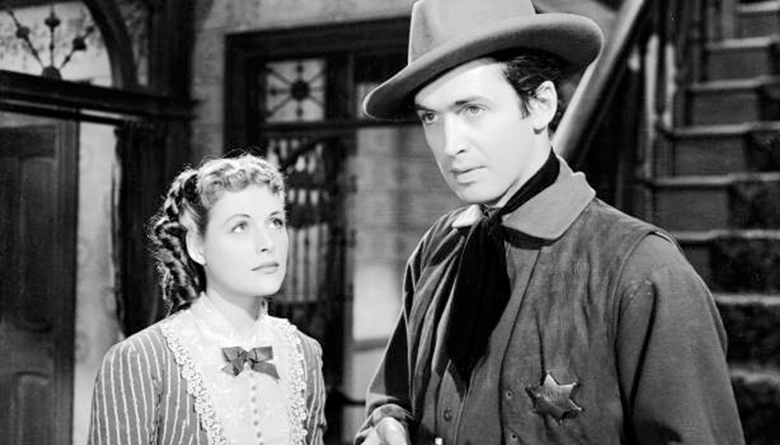 There’s also a wonderful catfight between Dietrich and Una Merkel, a knock-down, drag-out, rolling-on-the-ground, and dress-ripping brawl that is the prototype for all such scenes. In re-filming the scene, Blanchard suffered facial injuries. The role would reignite Dietrich’s career, and lead to other Westerns, including The Spoilers and Rancho Notorious. Although Blanchard would be a busy actress for nearly thirty more years, appearing with John Wayne in McLintock!, Brandy was the best role of her career.

For the villain, no other Hollywood actor combined suave and tough better than Brian Donlevy. Lyle Bettger played the same character opposite Murphy. A smiling cobra, his appeal to the leading lady was unclear, compared with Donlevy.

The drunken deputy who sends for Destry was first portrayed by actor Charles Winninger, who proved a great comic foil to Stewart’s smiling straight-man. In the remake, the role was played by Stagecoach Oscar-winner Thomas Mitchell. Though he plays it broadly at the start, it becomes a more nuanced performance as it continues, and Mitchell gets a dramatic scene where Murphy sees that Mitchell’s disappointment in him is driving the deputy-turned-sheriff back into a drunkard.

For some roles, it was a wash as to who was better—they were all so solid. Except for being more sophisticated, the crooked mayor and judge played by normally lovable grandpa Samuel S. Hinds, was mighty close to also normally lovable uncle Edgar Buchanan. The physical resemblance and performances by the two pushy cattlemen who won’t pay the toll for their steers—Jack Carson in the first picture, and future Gilligan’s Island skipper Alan Hale Jr. in the second—make them nearly indistinguishable. Of the kids who idolize Destry, the first was Dickie Jones, who performed roping and riding tricks with Hoot Gibson when he was six, and in 1940 would be the voice of Pinocchio. The second, Lee Aaker, had been with John Wayne in Hondo the year before, and after Destry, would achieve small-screen immortality as Cpl. Rusty in The Adventures of Rin Tin Tin. The most dramatic change in cast and script is the replacement of Mischa Auer’s Boris with Wallace Ford’s Doc Curtis. Auer is a hysterically funny Russian actor whose character gets in trouble with his wife when he loses his pants in a bet with Dietrich. Ford loses his wife’s new hat to Blanchard the same way, but while Auer is strictly comedy relief, Ford serves a real story purpose. The audience knows in both pictures that the original sheriff has been murdered. In the first, Donlevy simply says the sheriff was called out of town, which eventually leads to a search for his body. In the second, the sheriff’s death is acknowledged, but explained as a heart attack—and Ford’s Doc Curtis has signed the false death certificate literally under the gun.

Of course, the big question is who was better, Jimmy Stewart or Audie Murphy? The answer is not as predictable as one might guess. Obviously, Stewart is the Oscar-winner with a career full of wonderful comic and dramatic performances. Murphy was the hero who decided to give acting a try. But Murphy brings an innocence to the role that is every bit as endearing as Stewart’s knowing humor. At 30, Murphy was only one year Stewart’s junior, but looks about eighteen, and way out of his depth. Both performances are as enjoyable as they are different.

Destry Did You Know?

Tom Mix starred in the first screen version of Destry Rides Again. It stayed much closer to the novel’s plot than the later versions but is remembered primarily for being Tom Mix’s first “talkie.”

Spotlight on the future “Sheriff Andy Taylor.” In 1959, a Broadway musical opened, starring a pre-Mayberry Andy Griffith. It ran for 472 performances.

On the Small Screen…

The most recent Destry is the 1964 Universal TV series starring John Gavin. The show combined elements from the novel and the film versions. It ran for just one season.

Bonus Trivia: INSP fan favorites appeared in episodes of Destry. Fess Parker (Daniel Boone) starred in the episode, “Destry Had a Little Lamb,” and Ellen Corby (The Waltons) in the episode, “Blood Brother-in-Law.”